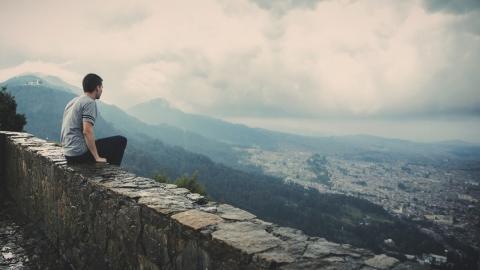 “…and I sat where they sat, and remained there astonished among them…,” Ezekiel 3:15.

Recently, I was privileged to be a part of a youth conference for several churches in Baja California, Mexico. It was such a joy to be among the believers there. Their passion for God and commitment to service is enough to challenge the most faithful among us. The caliber of their Christianity makes me almost ashamed of my own “American Christianity.” While here, we struggle just to get Christians to go to church, they were desiring for me to preach until near midnight. They are hungry for the word of God.

While there, I learned a few lessons.

Teenagers can take preaching; even hard preaching
“Despise not prophesyings.” 1 Thessalonians 5:20
Every time I get to visit to the churches in Mexico, I am amazed at the tenderness of the hearts of the young people. They are so on fire for God. Many of them are in the Bible institute there, and cannot wait to go out and start a work of their own. The first night I was there, the service began at 7:30pm. Between the singing, specials, and the pastor getting the young people fired up, I didn’t get to begin preaching until well after 8:00pm. That’s the time most churches in the states are winding down their mid-week service. I preached for well over an hour, since the translator kept interrupting me (for those who have used an interpreter, you know what I mean). I had their attention. I asked the pastor when I should end, and he just said to keep preaching. This was the start of their four-day meeting. The next day, they must have had seven sermons throughout the day, beginning at 9:30am. Don’t get me wrong, they had some fun in the afternoon, but the focus clearly was on the preaching of God’s word. The evening service consisted of two preachers, going until almost 11:00pm.

The responsiveness to the preaching was also quite amazing. Not only could they take hard preaching, but they seemed to relish it. The pastor was known to often thump the young people over the head with his Bible. The harder he challenged them to serve God, and turn from sin, the more excited they would get. The altars were always full, and it wasn’t mechanical, as it was often accompanied by tears.

It is a sad state that we are in when we allow our young people to be lethargic toward the things of God. We have to constantly bribe them with excitement, entertainment, and pizza just to get them to show up.

Lack of funds is no excuse
“But my God shall supply all your need according to his riches in glory by Christ Jesus” (Philippians 4:19).
There tends to be the thought among churches in poor communities that Americans have all the money. While I was there, I was never asked for a dime. They could use it. They had many needs. They were trying to build buildings and develop the property to house their ministries, they had young Bible institute students there that had to be housed and fed, and they had a Christian school. All of this takes money. Well, they had built an old-fashioned oven for the purpose of baking doughnuts. And they sure made good doughnuts! They would bake dozens and dozens, then drive to the nearby cities (over an hour away) and sell them. The money they earn from their doughnuts funds the majority of the work there, and everyone gets involved, even the children. What hard work and creativity!

A vocation is not the issue when you are called!
One of the things that really caught my attention is their commitment to serving God. The laymen are consumed with ministry work, and unconcerned with the world. The young preachers want to give their lives to Christ’s service, and aren’t looking for a title or position. They are not wondering if there is some vacant pulpit somewhere that they might fill; with a salary and benefits. They just want to be servants. They had such joy and pleasure in serving God, serving their leaders, and ministering to others.

This stood out to me because of my own testimony, as well as recent experiences. I am in my tenth year of ministry. Only these last two years have I been able to commit myself to full time ministry without the aid of two or three other jobs. Who needs a vocation when you have a calling? In recent years, I have interviewed several Bible college students and graduates. It has amazed me the expectations of these young men. Many are looking for a full-time salary, a title, and some sort of prestige, right from the beginning. What happened to, “…The foxes have holes, and the birds of the air have nests; but the Son of man hath not where to lay his head,” (Matthew 8:20)?

The Lord’s work should be done well, no matter where you are
The church that was hosting this meeting was only a few years old. I first visited this church in its first few months. They had very little, but a property had been donated to them. They didn’t have much of a building, but it was theirs. They had walls and a roof, but no finished drywall yet. They decorated it with curtains and flowers and made it theirs. The property was a dirt lot, yet it was the cleanest, most well-kept dirt lot in the entire village. During this visit, I was amazed at what they could accomplish in just a couple of years. They went from one incomplete building to several, well done buildings. Everything was painted and well kept. They really believe in having a good testimony in their community. “…the house that is to be builded for the Lord must be exceeding magnifical, of fame and of glory throughout all countries…” (2 Chronicles 22:5.).

Hard work is a necessity
“…My Father worketh hitherto, and I work” (John 5:17). After several hours of morning preaching, we were outside getting ready for lunch. My attention was arrested when I saw two of the young preachers (late teens/early 20s) with their ties and dress clothes on, digging a trench to lay a new water line. At the same time, another team was putting up a concrete wall by the restrooms. These people never took a break! C. H. Spurgeon said, “Laziness is the scourge of the ministry.” We could learn a thing or two from the work ethic of these Christians.

Each time I visit the churches in Mexico, I am encouraged, challenged, and taught. They invite me there to preach and teach, and I am the one who becomes the student. I think it would be very healthy if our churches challenged the laity to spend some time on the mission field. We might begin to take our eyes off ourselves, see the bigger picture, and maybe, just maybe, be willing to genuinely sacrifice, and go “all in” for the Lord’s work!

One thought on “5 Lessons from the Mission Field”